Do You Really Need To Know Your Numbers?

Their answers to my questions were each very different.

One dentist said he believed that his front office team was not saying the right things over the phone.

And the other dentist said he had a great team on the front desk and they had been at his Practice for a long time.

Which got me thinking.

Was the difference in their responses to my question because one dentist had an awful front office team not saying the right things when they answered the phone and the other dentist had a brilliant efficient team answering the phone?

Only the dentist who had listened to the calls being taken believed his team could be answering the phones much better.

The other dentist had not ever listened. He believed his team had it all under control.

How did he really know?

My next question to both of these dentists confirmed everything.

“Does your front office record the number of New Patient Enquiry calls and how many of those callers make appointments?”

Both dentists said they did not measure their calls.

They have no idea!

That’s because the Dentist is busy with patients all day. How can they sit and listen to the front office taking calls to see if they are saying all the right things to the caller?

Having these numbers is a measure of the success of the calls.

Having these numbers lets you know how well the calls are going.

Having these numbers enables you to decide if your front office really does need help.

After talking to these two dentists it made me wonder how many Dental Practices out there really have NO idea what their conversion rate is on calls and why the caller is not making an appointment.

Is it the caller just not wanting an appointment and they just wanted a chat?

Is it the caller only wanted the price?

Is it the caller wanting to know more about their dental problem?

Or is it that the person answering the phone doesn’t know what to say to help the caller make the appointment?

After all, the reason they called was to make an appointment and to fix their problem.

This blog will feature simple practical ideas that are easy to implement tomorrow in your Dental Office, impacting immediately on your Patients’ Dental  Phone Experiences, and ultimately, improving your practice profitability.

At present I have availability for three new private clients. For more information on how I can improve your Dental Office’s Phone Numbers contact me, Jayne Bandy at  jayne@theDPE.com 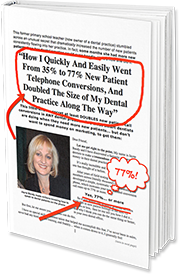